India is home to between 50 and 60% of all of Asia’s wild elephants and about 20% of the domesticated elephants. As such, the country is of paramount importance for the survival of the species. The elephant plays a central role in Indian life and has done for many centuries. Elephants are closely associated with religious and cultural heritage, playing an important role in the country’s history. They remain revered today.

An India without elephants is simply unimaginable.

Click here for the latest news about elephants in India 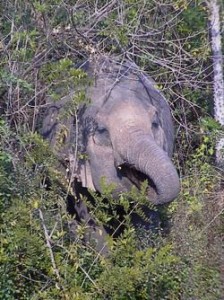 In past centuries, the forests of India literally teemed with elephants. Although no census or estimates of the wild population exist, it is said that in the early 17th century the Moghul Emperor Jehangir had 113,000 captive elephants throughout his empire. Extrapolating from this figure, it is easy to imagine a wild population comfortably in excess of a million.

Today’s population is obviously a fraction of that, but large numbers of sustainable herds exist – particularly in the south and northeast.

Wild elephants in India are facing a variety of problems, but most focus around the usual issues of habitat loss and human-elephant conflict. These have been on the increase since the middle of the 20th century as the explosion of the population and the demands of economic development led to the clearing and cultivation of former elephant habitat.

Concern for the threat to the elephant led to the formation in 1992 of the government backed “Project Elephant”. This scheme was intended to preserve habitat and establish elephant corridors, allowing for the traditional migration patterns of established elephant herds. Addressing human-elephant conflict issues and improving the welfare of domesticated elephants was also a central part of the organisation’s brief.

The organisation presided over the establishment of 25 Elephant Reserves throughout the elephants’ traditional range and covering a total area of 58,000 km². A population survey of the reserves in 2005 found that over 21,000 elephants were living in the protected areas and the population was actually on the increase.

Project Elephant has also established the MIKE (Monitoring of Illegal Killing of Elephants) programme of CITES. This has uncovered a significant increase in the poaching of bull tuskers, which has damaged the population dynamics by disturbing the sex ratio. In some areas, the normal level of 1:12 (male-female) has been so distorted that 1:100 has been known. This abnormality seriously affects the genetic viability of what on the surface can look like healthy sustainable populations. 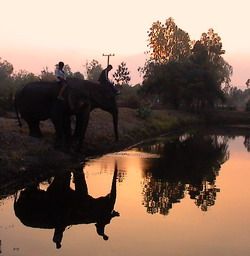 India has a long history of elephants in domestication with the animals participating in many areas of Indian life from war and ceremonial use to transport, construction and logging.

A survey by Project Elephant in the year 2000 found a total of 3,400 domesticated elephants owned by the following groups:

The elephants are engaged in the following types of work:

India has some of the strictest elephant legislation in Asia, which should provide adequate protection for the country’s 3,600 domesticated elephants. However the laws are rarely adhered to or enforced and many of India’s captive elephants suffer as a result. 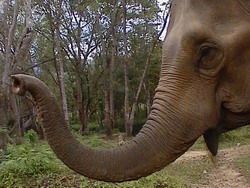 There is a mixed picture with regards to elephant conservation and welfare issues in India.

Project Elephant has made a huge difference and provided a focus for conservation effort. Although there are still many remaining problems, these efforts are beginning to bear fruit regarding the conservation of India’s wild elephants.

The situation regarding the captive animal reveals a more worrying trend. Despite a rich culture of domesticated elephants, many animals are not receiving the welfare they require under the law and are suffering as a result.